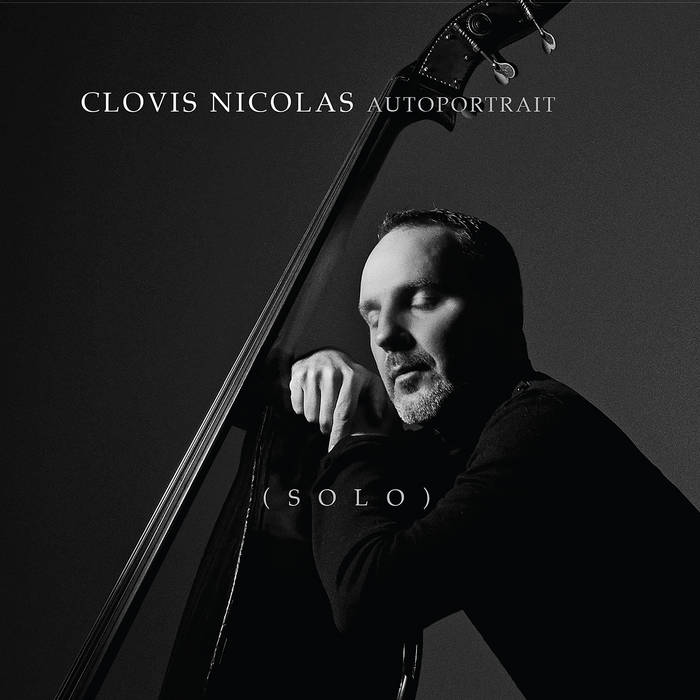 Recording a solo album is perhaps the most daunting feat for any instrumentalist. The time it takes for a musician to hone skills, develop a repertoire and then learn to trust his or her instincts is enough to turn most off from the project. The opportunity provided by the extreme situation of the pandemic allowed bassist Clovis Nicolas to complete this solo album, Autoportrait, an encapsulation of his 2020 spent working on himself and his art.

The idea of recording a solo bass album had nagged the French-born, New York based Nicolas for two years. The concept alone does not provide much in terms of reference, there only being a few dozen examples of solo bass recordings and those done in fairly similar fashion, with open-tunings, meditative compositions, and a lack of variety or edge. Nicolas realized that he would have to work extremely hard to make a recording that covered all of the potential he envisioned for it, without a clear prior frame of reference.

For his recording, Nicolas reflected on the first jazz lesson he learned: “Be your own rhythm section.” This meant to consider musicality, harmonies, and structure within his solo performance, but to also celebrate the services that the bass provides to the ensemble.

Nicolas began the project in September 2019 by composing “Four Steps,” but paused the operation until he had a casual meeting with his peer and friend, producer Daniel Yvinec, in January 2020, over coffee. After telling Yvinec of his thoughts of recording a solo album, Yvinec reinforced the importance of the project. It became clear to Nicolas that he found the right person to help produce the album and be a sounding board for his ideas as the project unfurled.

It was shortly thereafter that the world was stricken by the COVID-19 pandemic. The work for freelance musicians all but disappeared. The saving grace for Nicolas was that he found time. Time to spend on this work he had been obsessing over for years.

Nicolas retired to his rehearsal studio and reflected. There he would come up with an idea, record it, listen back and critique, and then build upon the work. Nicolas compares this process to a painter refining his image on canvas by looking into a mirror. Developing a program was tough because Nicolas wanted to provide an overall shape to the proceedings along with a variety of approaches.

Nicolas and Yvinec would occasionally speak over the phone or by Zoom meeting to tighten up ideas or field suggestions on material and themes. Their efforts culminated in recording the album at Sear Sound in New York City in September 2020.

The recording begins with “After Bach,” Nicolas’s two-part suite that he wrote as a companion to J.S. Bach’s Cello Suites that many bassists choose to study and practice. Encouraged by the interest sparked by a social media video he posted, Nicolas swung back to Tadd Dameron’s clever “Hot House,” a tune that the bassist loves. Yvinec proposed that Nicolas should attempt a transcription of Coleman Hawkins’s solo on “Body and Soul,” a difficult feat that Nicolas performs beautifully. Nicolas picked “Thon’s Tea” from his own book, changing the key to open his strings and the feel of the tune.

“Free” is just that: a freely improvised piece that utilizes a four-note motif as a reference for some exuberant playing, while “Another Rendezvous” playfully refers to Nicolas’s last recording, with a blues that showcases his strong walking bass style. “Jubilate Deo” sprang from Nicolas’s 10-year study of counterpoint, the piece written as an exercise, the piano recording being the piece’s first performance by his instructor, Kendall Durelle Briggs. The seed of the solo bass recording was planted by legendary bassist Dave Holland, who Nicolas was astounded by when he heard Holland play solo live in Marseilles, France. “Four Steps” is a vibrant piece with many jumps and creative elements written in tribute to Holland.

The meditative take on Duke Ellington’s “Solitude” is informed by Billie Holiday’s somber reading, while Lennie Tristano’s “Line Up” provides a serious workout, the chromatically built piece being adapted for bass and turning into a sort of lively technical study. Originally written as a prelude for piano, “Chloe” is a tribute to Nicolas’s mother, the person most responsible for his pursuit of music; the piece is reworked to insure the clarity of the bass on its striking chords. Nicolas showcases his superb walking bass again on the freely played “Lady Bass,” an incredibly paced piece based on rhythm changes that has him on a tight rope. The recording concludes with the Dennis/Adair standard, “Everything Happens To Me,” a go to piece that Nicolas owns and plays with conviction.

Clovis Nicolas spent the past year solidifying a solo recording that truly covers the full scope of what a bass can do. His Autoportrait was birthed of a time and situation where Nicolas could be reflective about his craft, edit critically, and truly push himself into some fantastically creative spaces.