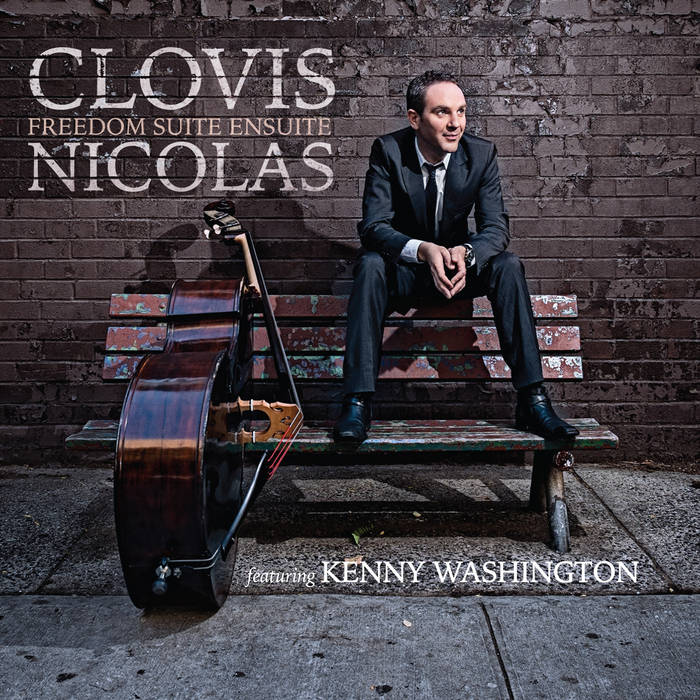 The concept of freedom in music relates to many things. Bassist/composer Clovis Nicolas didn’t eschew formal jazz harmony and rhythm in the search for freedom but found a measure of added purpose and space for his bass playing in a chord-less band format without piano or guitar. Freedom Suite Ensuite is a recording of Nicolas’s efforts in this formation and a tribute to the musician who exemplifies playing free within a form, saxophone great Sonny Rollins.

Nicolas has been an important voice in the New York music scene since his arrival from Paris in the early 2000s. Having already established himself as a first-call bassist in Europe, he quickly garnered attention with many of the music’s most noted players, including Peter Bernstein, Jane Monheit, Frank Wess, Joe Magnarelli, Behn Gillece, and Samora Pinderhughes.

The concept behind Freedom Suite Ensuite came from a succession of regular gigs that Nicolas participated in with a two saxophone, chord-less quartet. He began to find a new identity for his bass within this assemblage, including an increased influence on the music’s direction, expanded range of expression and an added focus on soloing. There were also many examples of similar ensembles whose recordings began to inspire his conception more and more, including John Coltrane and Don Cherry’s Avant Garde, Ron Carter’s Etudes and Ben Wolfe’s 13 Sketches.

The sound identities of these ensembles were definitely in Nicolas’ s head as he chose who he would record with. Drummer Kenny Washington was a faculty member at Juilliard while Nicolas attended; Washington had a tremendous impact on Nicolas when the two played together. Nicolas’s appreciation for Washington’s breadth and taste were echoed by the master drummer, who recommended the bassist to many. Tenor saxophonist Grant Stewart has been playing with Nicolas since the bassist’s arrival in New York and proves to be an excellent foil and soloist, who is incredibly articulate within the changes. The trumpet duty is split between the introspective Brandon Lee, a supportive bandmate and focused soloist, and the fiery Bruce Harris, a soulful player suited for the recording’s blues and standard tunes.

Nicolas wanted to achieve a few things with the recording. He wanted to attempt a new version of Sonny Rollins’ s incredible “Freedom Suite,” a piece that has been done almost exclusively by saxophone. Here he wanted to add the trumpet to freshen up the piece in a respectful way. The “Suite” would be followed by the “Ensuite,” or in French, “afterwards,” the following program of original compositions and standards.

The ensemble’s sound is established quickly on the easy-going “The 5:30 PM Dive Bar Rendezvous,” with its title and form emulating the quirkiness of Thad Jones, with a perfect ambiance for happy hour, featuring Harris on trumpet. Rollins’ s “Freedom Suite” is broken down into three parts, which provide different approaches to reorganization of the piece, separated by two “Interludes” without solos. The slightly angular blues of “Grant S” was written for the saxophonist by Nicolas and is a great soloing vehicle with some subtle changes in the harmonic form. The off kilter “Nichols and Nicolas” is inspired by Herbie Nichols’ s idiosyncratic style, the melody springing to Nicolas in an hour while the changes took nearly a month within an unusual AABC form.

The bouncy “You or Me?” is a contrafact of the Irving Berlin standard “The Best Thing for You (Would Be Me),” while Nicolas’s “Dark and Stormy” is a noir inspired waltz, the composer imagining Montmartre in the rain. A dynamic take on Kay Swift’s “Fine and Dandy” injects energy into the program with some brilliant solos from Stewart, Harris and Washington. The bassist’s “Speak a Gentle Word” (the title is taken from Oscar Wilde’s “Ballad of Reading Gaol”) traverses three sections with separate tonal identities with lyrical solos from Stewart and Lee. The program concludes with Nicolas’ s beautifully played solo rendition of Richard Rodgers’s “Little Girl Blue.”

Progress in jazz music has come through both addition and subtraction. While Clovis Nicolas retained the elements of formal jazz harmony, his experiments with removing piano and guitar from his ensembles enabled a different side of his playing to emerge. Freedom Suite Ensuite encapsulates all of the elements of Nicolas’s fascination with this system, from inspiration, to composition and to presentation.