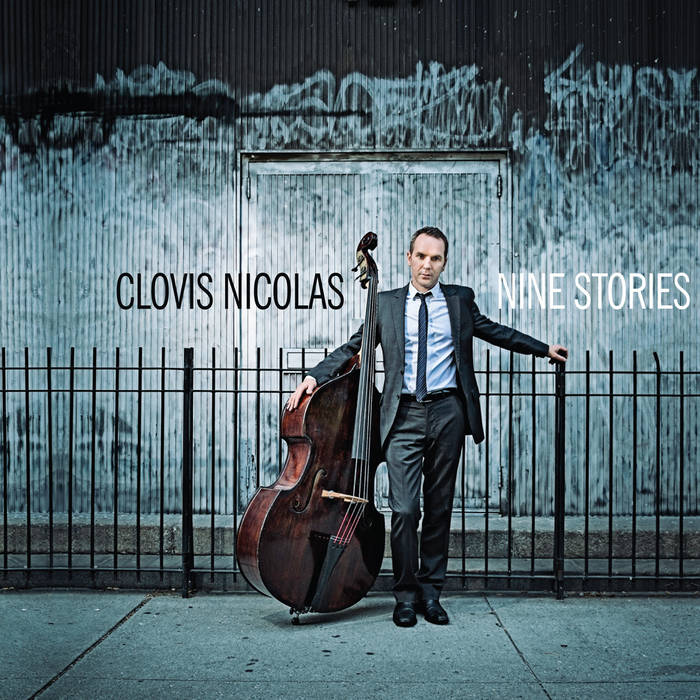 Tracks on an album can be like chapters in a book or short stories in a collection. Each may offer a unique narrative or style but together they give a more complete perspective on the author’s merits.

Bassist and composer Clovis Nicolas likes this trope. Thus, he entitled his debut recording as a leader, Nine Stories, as he has written or arranged nine compositions, with different approaches and styles. Each piece can stand on its own, but, when heard as a whole, they represent Nicolas’s unique musical vision, which incorporates classic and modern jazz influences.

Originally hailing from Provence in southern France, Nicolas decided to become a musician after graduating with a degree in philosophy from the University of Aix-en-Provence. He quickly established himself in Paris and began playing regularly with musicians as diverse as Andre Ceccarelli, Stéphane Belmondo, and Baptiste Trotignon.

Nicolas moved to New York in 2002 to continue his musical journey. He immersed himself in the New York scene and could be heard with guitarist Peter Bernstein and saxophonist Harry Allen, amongst many others. To continue his musical growth, Nicolas enrolled in the Juilliard School’s jazz program in 2009 where he studied with bassists Ron Carter and Ben Wolfe and also studied composition and orchestration with composer Kendall Briggs. The program from which he graduated in 2012 with a Bachelors and a Masters in music proved to be fruitful as he expanded his musical language and met a number of his future collaborators for his Nine Stories.

As a bassist, Nicolas had performed with numerous ensembles under a variety of leaders in a multitude of jazz styles. For his own recording, the bassist used these influences but with a more subtle manner of leadership. Rather than be a stand out bass soloist and front man, Nicolas would rather lead from behind, orchestrating and arranging the music in time as he pushes the band forward.

Nicolas composed five pieces and arranged four classic tunes for a skilled sextet. This configuration provided a perfect setting for his texturally rich writing while still retaining the flexibility of a small ensemble. Nicolas recruited superb and soon to be well-known musicians to form his sextet, including trumpeter Riley Mulherkar, saxophonist Luca Stoll, pianist Tadataka Unno, drummer Jimmy Macbride, and guitarist Alex Wintz, who often played a third horn part, rather than rhythmic, and provided a lighter, less brassy sound to the ensemble.

The recording begins with “Pisces,” a bright, swinging composition that is a tremendous introduction to this vigorous ensemble’s sound. Kenny Dorham’s plangent “None Shall Wander” is a great showcase for Wintz’s fat, bluesy guitar tone over the ensemble’s disciplined intensity, while “Juggling” is an angular piece with rhythmic play between ¾ and 4/4 time and a strict classical counterpoint melody between the bass and sax/guitar. Originally written for big band and dedicated to the generation of listeners who heard the hits of the American Songbook in their prime, the lush “Mothers and Fathers” follows with a simple melody over a rich harmonic structure and features touching solos from Mulherkar and Unno.

The shifty, contemporary “Thon’s Tea” is grooving and passionate and is followed by the ensemble’s singular take on Sonny Rollins’s “The Bridge,” full of New York energy, amazing solos, and even some clever introductory aural gridlock. Dedicated to trumpeter Tom Harrell, “Tom’s Number” is a colorful jazz waltz featuring two simultaneously played independent melodies over a complex harmonic structure.

The album concludes with two arrangements of classic songs, Schwartz and Dietz’s “You and the Night and the Music” and Burwell and Parish’s “Sweet Lorraine.” The former has a “classic” jazz approach and a wonderful solo from the leader, while the latter is a spare duo performance between bass and guitar, with Nicolas providing a enjoyable conclusion with his incredible playing heard in the most bare of settings.

Ever the willing narrator, Clovis Nicolas presents an astonishing collection of musical tales on his impressive recording Nine Stories. The compositions are diverse yet distinctive and are played with great verve by a young cast of fantastic musicians. The performances of these “stories” will surely spark the imagination of open-minded listeners.